I had a lot of Must Rest days in July, so I didn't get as much done as I wanted to. The thing I'm trying to do is get things going to the point where it can take care of itself -- that is, that there's enough content scheduled that I don't fall behind even when I do need to take more time for sleep, laying around in the sun, and not using my computer. For the moment, I'm sticking to making one bad fish pun at a time and if you don't like it, it's not like you're a dolphin in my tuna net.

Colring pages for fun and the dismantling of capitalism

I know some folx are gonna be mad that I'm basically a communist now, but those people were already mad at me for being.. queer, brown, and indi-jew-nous (Jewish and Native American). So honestly I'm not that worried about it. Anyway, the goal is to make sure there are 2 new free coloring pages on the Patreon every month. If you subscribe one month, you get all the previous coloring pages too! This can't possibly be a profitable exercise! But it can add up, and I'm hopeful that one day all these pages will become a coloring book that I can sell and maybe make a few dollars from.

Coloring pages aren't the only content, of course, you'll also find The Adventures of FibroShark, and there are (supposed to be) 2 free episodes of that every month too! Eventually, the free (and interstitial patron-only) comics will be bound into a book.

July Content Roundup
July was a light month for content cuz I'm still trying to get back to actually being able to do things on any sort of a schedule. Here's the links to

The Adventures of FibroShark
FIBRORIGIN free!
FINDEPENDENCE DAY patrons only! (technically went up in August, but so is this blog)

FibroShark hungry?
I don't want to get too far ahead of myself and over-promise (like I always do) then under-deliver (like I've always done), so let's just say for now that my plan is to eventually bind the Patreon comics (and some additional material for fun), into volumes of what I guess will be 100% more graphic novel and 75% less manifesto (womanifesto? enbyfesto? panifesto?) than the original idea backed by ~25 folx on the now-defunct Hatchfund. This is forward motion for the whole project, and I'm happy to have something to show for all the work I've done on it without really saying much over the last few years. 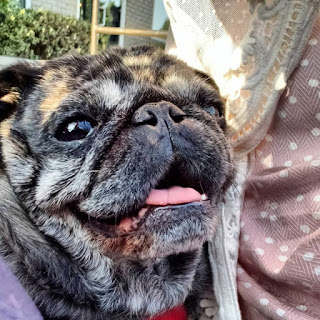 Ok, but I thought you were disabled
For a long time I didn't want to be a professional artist. There weren't enough resources available for me to just make art and do nothing else, so I tried to be a Good Capitalist and murder myself by inches in order to achieve having a roof over my head.

I worked full-time while I was in college, and as soon as I was able to get an actual job, worked full-time when I was out of college. There was a time in there that most of you remember where I was selling makeup and skincare, and I tried to parley that into a career as a makeup artist but I guess fat girls aren't allowed to do that. Eventually, I got burned out working gigs and the illness I've probably always had, became so severe that I couldn't work a regular job with regular hours at a regular place with regular paychecks. I tried. For a long time. Eventually, however, my whole wick burned out, my health spiraled out of control, and labor-for-wages was no longer possible. It was over. The dream of achievement thru the Hoarding of Capital died for me, and I nearly went with it.

However, I'm lucky enough to have a partner who is willing to support me while my income is in limbo. I've been somewhat forced to try out professional artist as a career, since I have nothing left to offer (or lose). And that's where I'm at. I don't expect to become rich off of my art, or even be able to cover such necessities as student loan debt (we don't need to talk about that here), but it would be nice to have my work out there and supported by people I've never met. So, I dream of a world where art matters more than money and democracy is actually and actual thing that happens.

My disabilities affect every area of my life, because they affect every system of my body. As a result, disability is a major theme in my art. I also believe that my individual person is affected by the mistreatment of the planet at the behest of massive multi-national corporate entities (who are people, legally speaking, but the planet is just a rock we extract resources from and not a person for some reason); this has resulted in the more serious art I make having turned the corner into activism on behalf of the Planet.

Look: every THING is connected to every other THING. Not just by the internet, but by the nature of existence.
Posted by The Empress at 12:16 PM