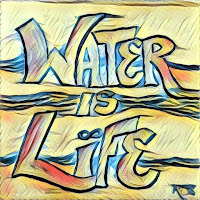 New "assistant"
This guy, Bocephus Louise (aka Bo, LilBo Puggins, Bocephalus, Bubba, etc) has moved into my house and into my hearts. He licked my face within an hour of meeting me, which is usually a good sign with a dog. I had to fight a little to convince Ten that I needed a new dog after Stewart died, but we eventually figured it out and a number of our friends donated to a crowdfunding campaign to help defray the costs of adopting and training a new service dog.

Stewart was a great dog, but he wasn't a great assistant. So far Bo has a handle on how to make me keep to some kind of schedule (primarily getting out of and/or going to bed), and even makes use of the official assistant's ladybug pillow. And he yells at me when I've been in the bath too long. It's the cutest damn thing. We're still working out how to lower my pain levels, but he's trying.

Also, is he the cutest thing on the planet or what?

Water Is Life
My current painting series is uh... not moving very fast. I'm finishing a painting a month (or less), and it's only a 7 piece series! Unfortunately, the world isn't moving as slowly as I am and things like the Dakota Access Pipeline are going ahead as planned because oil profiteering is more important than the drinking water and sacred sites of the Sioux Tribes.

Global Warming is affecting everyone thru floods, fires, and weather that can't make up it's damn mind! Here in Seattle it's been raining as much as people who don't live here think it does! Thunderstorms have become significantly more common; and we've had less than 7 sunny days since October.

So, while the planet continues to fight back against the infections humanity insists on perpetuating with fossil fuels, I have plenty of outrage to fuel my own work. I wish I could just make pretty pictures of unrealistic scenes, but unfortunately, my work has a lot of rage inside it right now. Protecting the environment is a gigantic and intersectional battle in which everyone must participate. Now, I get the draw of wanting to sell out all your fellow earth-dwelling humanoids in order to win the longest game of Monopoly ever, but eventually the planet is gonna win and, in the words of George Carlin (RIP) shake us all off like a bad case of fleas.

I don't really have much of a manifesto together for this series, but it is continuing to come into being when I have enough energy to actually sit down and paint. Which actually segues nicely into...

Pain...ting
My disability battle is still in its first year, but I did get my initial denial and started working with a lawyer who thinks that, based on my documentation style (compulsive), we'll be able to build a case. The only downside is that this could take up to 3 more years to get it approved. Suffice to say, my health has become quite the messy all-encompassing project.

When I have time to work on things like FibroShark Hungry or Water is Life, often it's for less than an hour of sitting with the project and working on it. Even things like working at my computer are extremely hard on me because I can't really do anything for pain management unless I wanted to waste half my time and energy asking myself what exactly I was working on. But, you know, I do get a pain-free day every once in a while (okay, not pain free, just less pain than usual), and I take those times to do something.

Most of what I do right now is take baths, and try to occupy my brain so that on days when I can't function, (but also can't sleep), I don't go mad from boredom. Being chronically ill is extremely boring. Like, imagine the most bored you've ever been in your life, multiply it by 1000 and then stab yourself in the eye with a butter knife. That's kinda what my life is right now. Even worse is the fact that my career is on hold until disability goes thru and I have some kind of income that will allow me to do the things I need to make this "working artist" thing a reality. I can still paint, but I can't take the hustle of self-employment; particularly self-employment in the arts.

I feel like giving up sometimes -- coping has been especially difficult the last few months for... reasons -- but I know a lot of great people, (particularly artists I admire), have gone thru similar or worse and been able to use that suffering to make great works that changed how people felt about their medium. Those battles also changed history, because art doesn't really exist without suffering. ...actually, life doesn't really exist without suffering.

Now I'm rambling. And typing is starting to hurt. And I need lunch.

Enjoy yourselves out there. Make whatever you're doing great, even if you suck at it art first.
Posted by The Empress at 4:11 PM